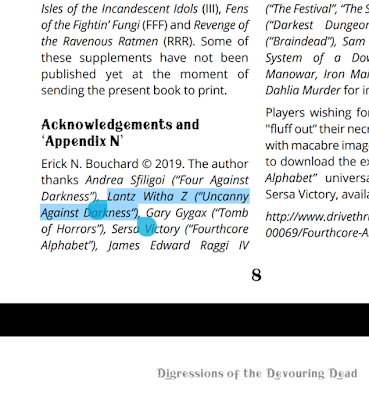 Just wanted to pop in to show off a mention I got from Ganesha Games in their most recent 4AD release; Digressions of the Devouring Dead. I'm truly honored to be mentioned in this book, it absolutely made my whole week (though I'm still puzzled on how they ended up finding my rulebook from over 3 years ago.) Anyway, if you haven't played 4AD before, I highly recommend it. The core system of the game is so simple, yet incredibly engrossing and fun. And for only 8 bucks, you can't go wrong. I haven't played Digressions of the Devouring Dead yet, but the price point on it (and really all of Ganesha Games' content) is fantastic as well.
As for the hobby, I sold off most of my miniature crafting/painting stuff, so I wouldn't expect my hiatus to end anytime soon, unfortunately. That's all from me for now! Later days.
Posted by L Witha Z at 08:08 0 Comments

Look What I Did: Built A Table 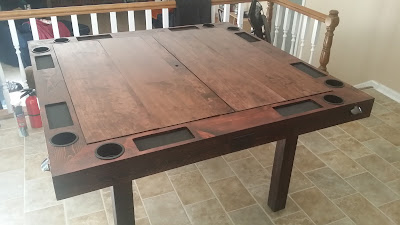 So the hobby table has been pretty vacant for the last month, but only because I've been creating a gaming table. I've always wanted to make my own, with all of the bells and whistles, but without time, space and knowledge on woodworking and electrical work, I never really got around to it. Until I moved to a new place with the room for such a project. And so, I dove in. More after the jump.

Tags: Look What I Did, Table

Awakened Tree Complete
(I Am Broot!) 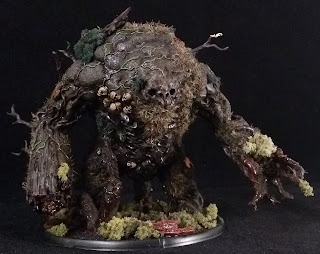 Any DnD druid that lives long enough to see level 8 wants their very own Awakened Tree, my druid being no exception; having already picked out the name Broot for his future buddy. So, in preparation of hitting level 8 soon (I hope), I got this "miniature" off of Mierce Miniatures. I put quotations around that word because this thing is pretty damn big. Like, throw it at somebody and cause a concussion big. And maybe it was the size of this canvas, maybe it was feeling like I had more freedom with all of the randomly placed foliage or maybe it was simply that I wasn't painting those dumb vampires, but this project was a lot of fun. More pics after the jump.